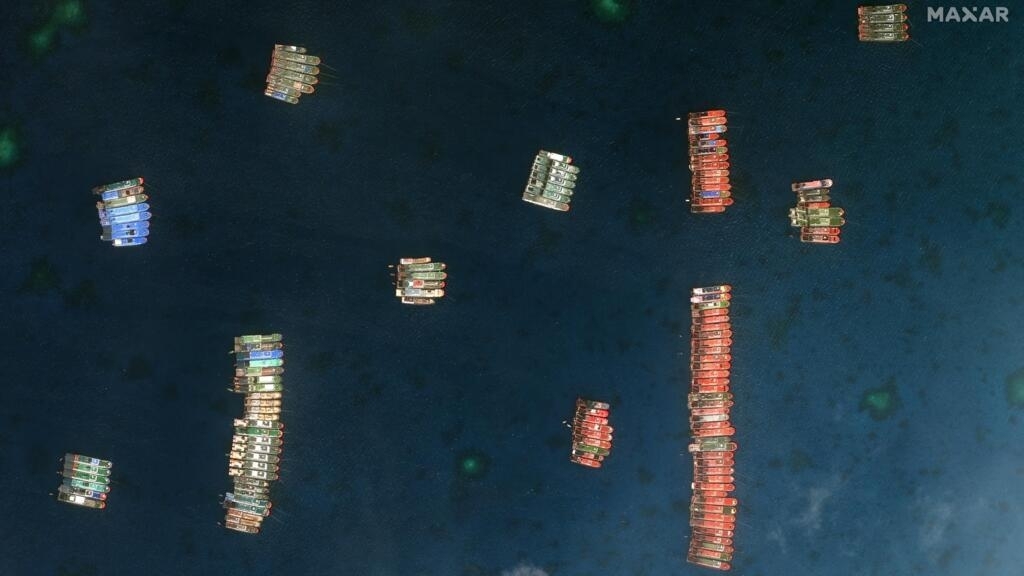 The United States on Wednesday warned China against what the Philippines and Taiwan see as increasingly aggressive moves, reminding Beijing of Washington’s obligations to its partners.

“An armed attack against the Philippines’ armed forces, public vessels or aircraft in the Pacific, including in the South China Sea, will trigger our obligations under the US-Philippines Mutual Defense Treaty,” State Department spokesman Ned Price told reporters.

“We share the concerns of our Philippine allies regarding the continued reported massing of PRC maritime militia near the Whitsun Reef,” Price said, referring to the People’s Republic of China.

More than 200 Chinese boats were first spotted on March 7 at Whitsun Reef, around 320 kilometers (200 miles) west of Palawan Island in the contested South China Sea, although many have since scattered across the Spratly Islands.

This is Gaven Reef, one of China’s 7 artificial islands in the South China Sea.

I joined another maritime patrol today and saw this – more than 100 Chinese fishing vessels massing up by Gaven alone.

It’s not just about the islands anymore. The swarm is here.@abscbnnews pic.twitter.com/trM1Vci25U


China, which claims almost the entirety of the resource-rich sea, has refused weeks of appeals by the Philippines to withdraw the vessels, which Manila says unlawfully entered its exclusive economic zone.

Tensions have also risen with Taiwan, which Beijing claims as part of China, with the self-governing democracy on Wednesday reporting that 15 more of the mainland’s planes crossed into the island’s air defense zone.

Price voiced “concern” about the Chinese moves, saying: “The United States maintains the capacity to resist any resort to force or other forms of coercion that would jeopardize the security or the social or economic system of the people on Taiwan.”

He was using language from the Taiwan Relations Act, under which the United States is obliged to provide the island with the means to defend itself against Beijing.

President Joe Biden has vowed a robust defense of allies and, in a rare point of continuity with his predecessor Donald Trump, has supported strong pushback against Chinese assertiveness.

China seeks to speed up its Covid-19 vaccination campaign